Objectives: The objective of this project is to assess environmental factors associated with glacial discharge (sedimentation rate, temperature, light, nutrient concentration, and salinity) as drivers of recruitment and succession in benthic sessile kelp bed communities.

Habitat Degradation Due to Melting Glaciers: Effects of Glacial Discharge on Kelp Bed Community Recruitment and Succession in Kachemak Bay 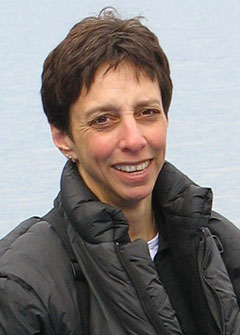 Melting of arctic and subarctic glaciers carries sediment-laden freshwater to coastal habitats. Glacial discharge can structure and degrade benthic communities through multiple mechanisms that may restrict settlement and alter succession. The goal of this study is to determine the influence of glacial discharge on recruitment (bringing in new individuals) and succession in kelp forest communities. Kachemak Bay is an ideal setting for this study as an estuary with points of glacial discharge along the southern shore, and currents from the Gulf of Alaska at the mouth transporting this discharge around the bay. Recruitment of kelp and other bottom-dwelling organisms and community succession are being monitored on cleared and uncleared control rocks. Also being monitored are sedimentation, temperature, salinity, light, and nutrients. Freshwater discharge at the head of the bay will be used as a direct measure of overall glacial discharge in the bay. Additionally, wave exposure, substrate rugosity (bumpy or ridged), mobile invertebrate grazers and predators, and sea otter activity (otter pits) are being monitored to determine correlations between these drivers and algal and invertebrate initial and post-recruitment densities. Assessing the variability in succession across a gradient of glacial discharge will be a step toward determining whether recruitment or post-recruitment pressure (such as competitive interactions) are altered due to physical changes caused by glacial melt.

More information on this project can be found in a Glacial Melt video on YouTube and the 2016 news story “Glacier silt hinders establishment of kelp bed communities.”

Kelp forests support a wide range of commercial, recreational, and subsistence fish and invertebrate species. Processes that control the distribution and stability of kelp forests are important to fisheries in Alaska and to the livelihood of Alaskans. Rise in sea temperatures is increasing glacial melt into coastal habitats, including kelp forests. While glacial discharge is a natural process, the spatial extent, magnitude, and timing will likely increase or change due to climate change effects on melting. The maintenance of kelp forests is in part dependent on recruitment, which may be sensitive to or completely inhibited by glacial discharge. The altered environmental conditions could also alter the outcomes of competitive interactions. To understand the dynamics of nearshore rocky benthic communities, it is important to study interactions between macroalgae and sessile invertebrates. In order to assess human impacts, natural variability and climate change effects must be better understood.

This study is relevant to Alaska Sea Grant’s theme addressing impacts on and strategies for coastal ecosystems adapting to change, because coastal kelp forests are being impacted and undergoing changes due to global warming. This study will provide two years of baseline data on benthic sessile recruitment and succession. The results will enhance understanding of the role of glacial discharge in structuring nearshore communities. This study will help decision makers and resource managers distinguish the effects of glacial discharge on kelp forest communities from other biological and physical factors.

The objectives of this project are to:

In Kachemak Bay three sites were established on the outer side and three sites in the glacially influenced inner side. Cleared rocks were placed at each site in March 2013 and March 2014 as a substrate for recruitment and succession of benthic sessile organisms. Control rocks at the site were also selected to monitor change over the sampling period in established communities. Recruitment and succession are monitored by visually estimating percent cover of organisms and bare space and by counting individuals. At the same time, environmental factors associated with glacial discharge are monitored (sedimentation rate, salinity, temperature, light, and nutrient concentration). Additionally, freshwater discharge from Bradley River at the head of Kachemak Bay is monitored by the U.S. Geological Survey and these data will be used as a direct measure of glacial discharge. Factors that are not directly related to glacial discharge (grazers, wave exposure, sea otter pits, rugosity) are also being monitored. Sites were monitored in April and biweekly from May to September 2013 and sampling in 2014 will follow the same schedule. A seeding treatment will be added to the second year (2014) of the study to ensure that “seedling” pressure is comparable across sites. Statistical methods will be used to determine correlations.

This study explored the influence of glacial discharge has on recruitment and community development in kelp forest communities in Kachemak Bay Alaska. Recruitment of kelp and other benthic sessile organisms and community succession were monitored on cleared and un-cleared control rocks at six sites. Sedimentation, temperature, salinity, light, and nutrients are environmental factors directly influenced by glacial discharge that were monitored at each site. Freshwater discharge at the head of the bay was used as a direct measure of glacial discharge. Additionally mobile invertebrates and adult kelp in the surrounding community were monitored to determine correlations between these drivers and community development. At glacially-influenced sites with higher sedimentation rates, the developing sessile community was dominated by barnacles with little or no kelp and high temporal variation in availability of bare space. At more oceanic sites in outer Kachemak Bay, sessile communities were characterized by a slow increase in cover of encrusting and upright macroalgae, with high variability among sites. Using distance-based linear models, up to 72% of the variation in community development was related to mobile invertebrates and kelp in the surrounding community. Glacially-influenced environmental factors did not explain any variation that was not already explained by biological factors. This research indicates that glacial melt may influence recruitment and community development indirectly through effects on the surrounding community.

Relevance: Alaska kelp may suffer from climate change as glacier melt increases, because silt from the melt could inhibit kelp establishment and reduce light that is needed for photosynthesis. Large kelp beds serve as a nursery for fish and invertebrates and protect shorelines from eroding. Kelp, as well as the fish, crabs, and other invertebrates that live in kelp beds, are important harvested resources.

Response: Alaska Sea Grant–funded researchers studied the impact of silt from glacier melt on the ability of kelp to travel, settle, and grow on rocky substrate, known as kelp recruitment and settlement.

Result: The Kachemak Glacier, part of the Harding Icefield, has melted back with a total decrease in height of 16 meters since the 1950s. Runoff from the glacier feeds Kachemak Bay, where researchers found that long-term buildup of silt from glacier melt is preventing kelp from settling, growing, and establishing. Establishing the rate of melt and level of siltation provides an understanding of what monitoring is needed to evaluate changes in kelp and animal populations as glacier melt continues to increase. Inorganic sedimentation and kelp density were strong predictors of the sessile communities developing on rocks, indicating that these variables would be useful for predicting recovery rates after disturbance. The knowledge will help managers and decision-makers predict and prepare for changes; for example, deciding where kelp harvesting may be prohibited.

Recap: Alaska Sea Grant researchers confirmed that silt from glacial melt hinders establishment of kelp beds that shelter fish and invertebrates, and found that inorganic sedimentation and kelp density are strong predictors of biological community recovery, providing an information base for fisheries and habitat managers as the climate changes.