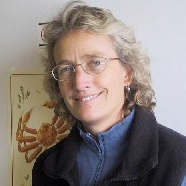 The Northern spot shrimp (Pandalus platyceros) ranges from southern California waters to the Aleutians. There continues to be a commercial fishery for this species from Santa Barbara, CA, to Southeast Alaska and Prince William Sound although the commercial fishery in many regions of Southeast Alaska have been closed since 2011. The closure in Southeast Alaska also extends to personal use harvest after 2012. The life history of this species is generally known to include planktonic larvae that hatch in the spring and settle as benthic juveniles. Molting increases their size and all shrimp become functional males prior to transitioning to reproductive females. This type of life history is known as protandry and as the functional male molts first to a transitional stage and later to the functional female, the shrimp increases greatly in size. As the fishery targets the largest shrimp, the reproductive females are removed preferentially. The timing of the fishery coincides with egg brooding and ovigerous females are removed from the population. To date, studies of spot shrimp life history are limited to California, Washington, and British Columbia where warmer waters accelerate life history parameters. The objectives of this project are to investigate the early life history of Alaska P. platyceros. Specifically researchers will study molting physiology (molt intervals and molting hormones) and oxygen consumption as a proxy for metabolic rate. After investigating the baseline physiological parameters, we will measure the effects of multiple stressors to include increased temperature and CO2 on molting biology and metabolism. Because early studies have published nutritional needs of the larvae and because we can maintain brooding females and post hatch larvae in the laboratory, we are confident that we will reveal important biological information concerning this Alaska species and potential impacts of climate change.

Spot shrimp Pandalus platyceros are an important commercial fishery and very little information exists about biology of Alaska populations, especially the early life history stages. This species of shrimp is protandric (all males become functional females) and is harvested from deep regions of the oceans (100–400 meters). There has been a dramatic and unexplained decline in populations of P. platyceros in Southeast Alaska (SEAK) and Prince William Sound (PWS) which has forced the closure of this fishery in parts of the regions. Oceans are changing and we are acknowledging that temperatures are warming and acidity is increasing and these effects are sure to impact the biology of this shrimp species. As environmental change impacts the metabolic physiology of the species, then compromises are made to life history traits such as growth, reproduction, and even survival.

Northern spot shrimp are a commercially important shrimp of SEAK and historically in PWS. This shrimp also provides for sport and subsistence fishing. We know very little about the biology of this species, and the majority of the information we do know was obtained from Washington state and British Columbia populations and is incomplete. This project addresses two goals of the Alaska Sea Grant Strategic Plan: Sustainable Fisheries and Aquaculture and Healthy Marine and Coastal Ecosystems. While there are no plans in Alaska to culture P. platyceros commercially or for enhancement, knowledge gained from this project will benefit potential shrimp enhancement projects. Aside from detailing early life history events of P. platyceros in Alaska, this project will identify impacts of environmental change (ocean acidification) on the metabolism of P. platyceros larval and juvenile stages.

Alaska Department of Fish and Game