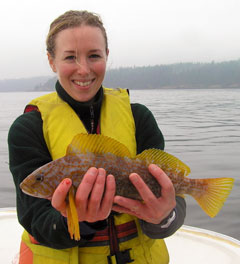 Hatcheries invest significant resources into salmon production to support lucrative and culturally important fisheries in Alaska. A key measure of success for hatcheries is the number of salmon that return to spawn of those released when young. However, the productive marine waters that support salmon are also a fertile environment for predators. Releases of hatchery fish can act as a “dinner bell,” attracting predators to release sites. This pulse of salmon smolts into the environment can also lead to higher predation rates on wild fish by increasing local predator densities. This predator gauntlet is the major source of mortality for smolts during the vulnerable first phase of their marine life, yet surprisingly few studies have quantified predation impacts on hatchery smolts. This study will provide insight into the fate of hatchery smolts by assessing the impacts of abundant predatory fish on young salmon in estuaries. We will measure densities and diets of two abundant predators known to consume smolts—Dolly Varden and staghorn sculpin—at natural rearing areas and release sites for one of the largest hatcheries in Southeast Alaska. Predators will be sampled before and after release of hatchery smolts to test the hypotheses that there will be a higher density of predators at hatchery release sites relative to natural rearing areas and that predation on smolts will be greater following release events. Our work will inform hatchery release strategies that reduce predation risk to smolts and provide an improved understanding of ecological factors that affect early marine survival of salmon.

Young salmon are subject to extremely high rates of predation during their early period in the nearshore marine environment. Understanding where, when, and what sizes of smolts are at highest risk of predation will help hatchery managers identify release strategies that improve survival of hatchery salmon. The three largest hatchery associations in Southeast Alaska released more than 450 million smolt and contributed $171 million to the economy in 2008. Therefore, even a small increase in the percentage of released smolts that return to spawn can translate into millions of dollars for Alaska’s coastal communities.

Our study addresses Alaska Sea Grant Goal 3 in the Sustainable Fisheries and Aquaculture theme area. We are partnering with Douglas Island Pink and Chum, Inc. (DIPAC), one of the largest hatchery associations in Alaska, which is sponsoring a large portion of this research. Hatchery managers will be engaged in every stage of the research, so that our study design will be ideally suited to provide information they can directly use for improving smolt release strategies that support sustainable hatchery production. This study is also relevant to Goal 1 in the Healthy Coastal Ecosystems theme area. By examining predation impacts on hatchery and wild smolts, our study will contribute to a more complete understanding of the ecological factors that affect early marine survival of salmon.

Over the course of 2017 and early 2018, we completed multiple project components and have begun to synthesize results. Notably, we finished our second and final season of field data collection which consisted of 9 sampling periods from April to May of 2017. Furthermore, predator stomach content analysis, staghorn sculpin feeding trials, and academic coursework related to the project were all successfully concluded. Many of these tasks were completed with the invaluable assistance of 37 generous volunteers, who represented a wide range of institutions and experience levels, from undergraduate students to senior UA faculty and agency personnel. Once again, a University of Alaska Southeast undergraduate student is completing a 3-credit internship working under the supervision of the PI and graduate student to develop their research skills and help complete various components of the project. During the spring and summer of 2018 we hope to finalize our results and present them, ultimately culminating in the thesis defense at the end of summer.

Recap: An Alaska Sea Grant–funded research project involving multiple partners and volunteers in the field and laboratory led to confirmation that two fish species prey on young salmon in late spring—preliminary information that can assist hatchery managers in planning a release strategy.

Relevance: Hatcheries invest significant resources into salmon production, supporting lucrative and culturally important salmon fisheries in Southeast Alaska. The three largest hatchery associations in Southeast Alaska contributed $171 million to the economy in 2008. A key measure of success for hatcheries is the number of released smolts that return to spawn, which is impacted by predation in the nearshore marine environment. Merely 2 percent of the 117 million smolts released by the Douglas Island Pink and Chum salmon hatchery in 2014 returned to spawn or were harvested in fisheries; the rest perished at sea.

Response: To determine where, when, and what sizes of juvenile salmon are at highest risk of predation, and to measure the biomass of juvenile salmon consumed by predatory fish, Alaska Sea Grant–funded researchers and volunteers sampled nearshore fish near Juneau. They conducted beach seining at hatchery release sites and at natural rearing areas before and after smolts were released by the hatchery, and examined stomach contents of predators. Researchers gave presentations on the results to hatchery managers, aquaculture industry members, fishermen, agency scientists, and the public.

Results: Researchers found evidence of predation on salmon smolts by Dolly Varden and Pacific staghorn sculpin, particularly during May and June. This preliminary result can inform hatchery release strategies. Seventeen volunteers were trained in the field and lab, including University of Alaska undergraduates, graduate students, and faculty, as well as NOAA and National Park Service employees.