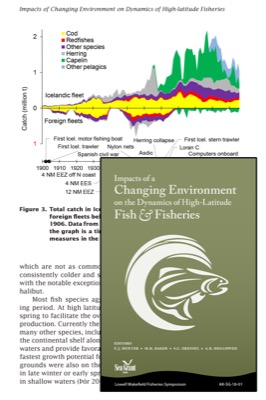 Do Environmental and Ecological Conditions Explain Declines in Size-at-age of Pacific Halibut in the Gulf of Alaska?

Size-at-age of Pacific halibut (Hippoglossus stenolepis) declined significantly since the 1980s. For instance, the average weight of a 20-year-old female Pacific halibut caught in the International Pacific Halibut Commission’s (IPHC) setline survey declined from 55 kg in 1988 to 20 kg in 2014. Our study uses fishery-independent length-at-age data from the IPHC to explore spatial and temporal patterns in growth and size-at-age of Pacific halibut from 1914 to 2014 in the northeast Pacific Ocean. We investigated hypotheses related to declines in size-at-age, including the effects of environmental and ecological variability on growth using linear mixed models. We developed an index of proportional growth, which we defined as the median annual change in length conditioned on initial median length for unique combinations of sampling year, cohort, and sex. Environmental covariates included the winter (November to March) mean Pacific Decadal Oscillation, an index of large-scale climate variability in the North Pacific Ocean, and summer (May to August) mean sea surface temperature along the continental shelf of the Gulf of Alaska. Ecological covariates included annual biomass estimates of arrowtooth flounder (Atheresthes stomias) and Pacific halibut to investigate the potential role of inter- and intraspecific competition, respectively. We found no relationship between growth and environmental variables, which is consistent with previous findings. Results suggest a negative correlation between arrowtooth flounder and proportional growth, as well as some support for a negative relationship between Pacific halibut biomass and proportional growth. Our best-fitting model explained only 28% of the observed variability in growth. It may be that other factors (e.g., bioenergetics or size-selective fishing) are more important contributors to variability in size-at-age.