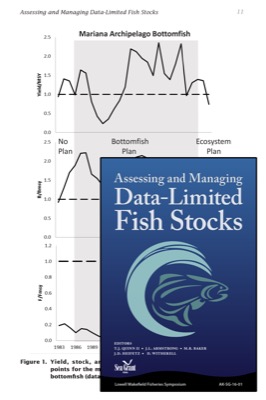 This is part of Assessing and Managing Data-Limited Fish Stocks

The Alaska Department of Fish and Game conducts hydroacoustic surveys in the northwestern Gulf of Alaska to provide density and abundance estimates of black rockfish. These surveys are conducted using either a grid or star pattern, depending on the habitat being surveyed. Simulation analyses are used to investigate whether the density estimator using the survey data produces biased density estimates. Forty distinct simulation spaces are populated with virtual fish schools. Individual fish locations (x, y, z) are drawn from either a uniform or normal distribution using four different school configurations and five population densities. Simulated schools are sampled following methods employed in the grid- and star-pattern surveys. Simulations were repeated 200 times for each distribution, school configuration, and population density combination.

The grid-pattern survey design and the density estimator produce accurate estimates of simulated fish densities with a mean bias of 0.00011 (SE = 0.00015). The star-pattern survey design using the same density estimator produces biased estimates of fish densities due to transects crossing at a common center and increasing the probability of a fish near the center of the pattern being sampled. To correct for the bias, a fish’s contribution to transect density is determined empirically and a linear model based on its distance from the star-pattern center is developed. Using this linear model, biases for the adjusted star-pattern survey density estimates are two orders of magnitude less than the unadjusted method with a mean bias of –0.00027 (SE = 0.00022).