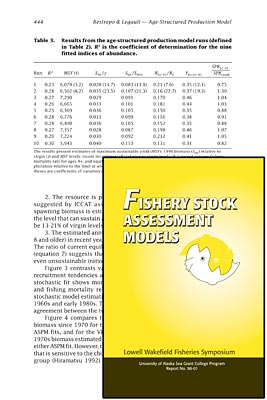 Estimation of red snapper bycatch in the shrimp trawl fishery of the Gulf of Mexico has been a contentious issue. Estimates are generated by the National Marine Fisheries Service (NMFS) using a general linear model which establishes a relationship between resource trawl survey data and catch data from the fishery obtained by observers on shrimp fishing vessels. The more complete time series of resource trawl data is then used to predict commercial vessel CPUE which is multiplied by total fishing effort to determine bycatch. The estimates are characterized by exceptionally low R2 values and highly skewed residuals (70% of the catch observations were zeros). We have attempted to improve the estimates by using fewer and larger time-space cells, pooling catch and effort data to reduce the number of zeros contained in the analysis, incorporating significant interactions, and using epochs to guard against nonstationarity. The R2 values for the revised models are 2 to 3 times higher than the R2 for the base case, and the distribution of the residuals is greatly improved. The revised estimates in recent years average on the order of 30 to 47% lower than the NMFS estimates. Nevertheless, bycatch levels are high (26 to 32 million per year) and are increasing due to increasing abundance of juveniles. However, the age of structure of the bycatch may consist of a much larger fraction of age-0 fish and fewer age-1 fish than has been thought. Bycatch Reduction Devices (BRDs) do not effectively exclude age-0 red snapper. Thus, the existing stock recovery policy based on NMFS GLM bycatch estimates and using BRDs to reduce shrimp trawl mortality of juvenile red snapper may be ineffective.