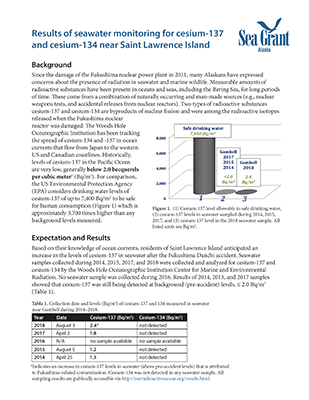 Based on their knowledge of ocean currents, residents of Saint Lawrence Island anticipated an increase in the levels of cesium-137 in seawater after the Fukushima Daiichi accident. Seawater samples collected during 2014, 2015, 2017, and 2018 were collected and analyzed for cesium-137 and cesium-134 by the Woods Hole Oceanographic Institution Center for Marine and Environmental Radiation. Results of 2014, 2015, and 2017 samples showed that cesium-137 was still being detected at background (pre-accident) levels, ≤ 2.0 Bq/m3.

The level of cesium-137 measured in the 2018 seawater sample was found to be 2.4 Bq/m3, which is slightly higher than pre-accident levels. Scientists at Woods Hole attribute this slight increase to Fukushima-related contamination, which has been detected at various locations along the west coast of the US and Canada. These levels are still thousands of times lower than the level considered of concern in drinking water by the EPA.